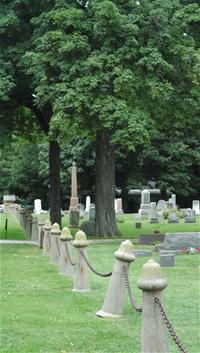 The Warrenville Cemetery is managed by the Warrenville Cemetery Association, which includes a President, secretary, treasurer, two trustees, and a sexton. The Cemetery Association is the second oldest organization in Warrenville and was incorporated by the state legislature in 1845. At that time it was 10 acres and a year later, Julius Warren sold it another acre. During the Civil War, the number of graves in the tiny cemetery almost doubled and additional burial ground was purchased from William Manning. Today, it encompasses approximately five acres. There are 2,950 grave sites in the cemetery and about 1,500 are occupied.

In 1851 the Association voted to enclose the ground with a picket fence, but lack of funding and labor postponed the project until 1853. The chain fence and decorative entrances now beautifying the grounds were the loving work of John Player, former sexton of the cemetery. He was also instrumental in having the large flower urn brought into the cemetery from the Chicago, Aurora & Elgin Railroad property when train service was terminated. In 1980, a Cemetery Board member and local cement contractor, arranged to have many of the old gravestones and markers that had fallen over the years reset. Finally, the present-day flag platform was a joint effort between the Cemetery Association, the VFW, and the Ladies Auxiliary. It was completed around 1996 and was dedicated on May 29, 2000.

The Warrenville cemetery is located on north side of Warrenville Road between Warren and Curtis Avenues. Questions can be directed to Pam Lowe at 630-888-9545.