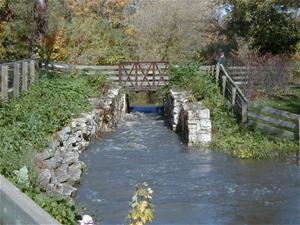 Bronze Plaque Program was initiated in 1982. Under the direction of a Historic Sites Committee, bronze plaques were placed on buildings which met its criteria: a pre-1866 erection date, a well-maintained condition, and in an appropriate state. The program was also extended to include historic sites.

By the end of the year, when In and Around Historic Warrenville was published, ten homes bad been awarded plaques and were identified in the text with a symbol. The following year, on May 29, a rock bearing a plaque was placed at the entrance of the former Grist Mill site in the Warrenville Grove.

From 1985 to date seven more structures have been plaqued—the last one in 2005—for a total of 17. Two are no longer standing—the Leonard store was demolished April 2, 2001, and the Dr. Mary Breme home June 20, 2003. The Colonel's Tavern was moved to Second Street on October 7, 1992 by the Warren Tavern Preservationists, and a plaque marking the original site was dedicated September 22, 2001.

If you believe your home may qualify for a plaque, contact the Warrenville Historical Society at (630) 393-4215.